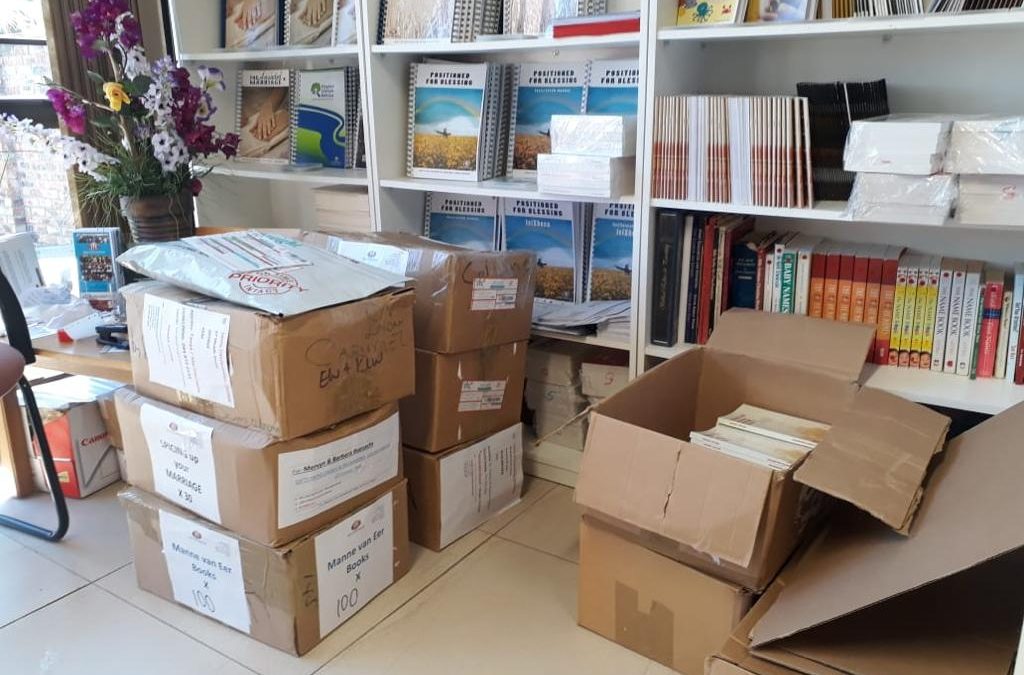 In December 2018, there was a moment of divine inspiration, in fact a turning point for Lindah and I and our ministry.

We were in the middle of moving our offices into our home. We have converted our garage and other rooms for this purpose and to be honest I was feeling very stretched and down . As we were unpacking all the boxes of books, I was challenged to find space to store them all.

Then a man who had come to help install our telephone system arrived, His face lit up as he asked if this was the office of Family Transformation. I said yes it was. Well he began to excitedly tell us that he had been doing the Men of Honor program for the last year in Gelvandale, a suburb of Port Elizabeth which experiences much poverty, gang violence and human struggles.

He told us that a year ago his life was a disaster. He had no work, his marriage was finished, he was on drugs and addicted to alcohol. On a certain day, he was about to commit suicide when someone asked him to come join the Men of Honor program. His life was totally transformed. He now had a job, his marriage was restored and in fact in December they were expecting a baby. He was now part of the worship team etc etc.

At the same time, Lindah was unpacking dozens of packets of seeds that she had used in a ladies conference. She felt God say to her, “these seeds will never produce a harvest lying in these packets. They have to be planted in fertile soil”.She came and told me about this and immediately I knew God was speaking to us as we stood looking at the dozens of boxes in front of us. Lives cannot be saved, changed & restored by these resources stored in boxes hoping someone will buy them sometime. He was a man who at the time, had nothing, could not have bought a book, he had to be sponsored. We decided to phone some churches we work with and give away 1500 books so people could receive them for Christmas. It was such a joy and delight for us to know the resources were going out to be planted in good soil.

We then attended 2 more graduations of the Men of Honor and Woman of Peace programs held at churches also dealing with poor impoverished communities . In both areas we saw people who were jobless and poor being transformed. We heard the most awe inspiring testimonies of healing and transformation from people who when they started the programs, could not have paid to attend the program of buy the resources. We became more conscious of the need to release resources into these desperate areas.

Over the years we have given away hundreds of thousands of Rands worth of resources and ministry into places like the PRISONS in Kenya and other needy areas around South Africa. God has always been faithful to supply our needs to accomplish this.

However, despite our sowing generously into the mission field, we began to feel that we have been operating basically on a buy and sell basis when God has given us these resources to distribute freely by FAITH on a “Sowing and Reaping” model.

Matt 10:8…freely you have received; freely give

We spend so much time and energy to try and increase our distribution to raise money to cover our running expenses that it is easy to lose sight that we are here to transform lives. So we believe that it is time to take a big step of Faith.

We believe God is leading us to change to a DONATION BASED Organization.

We will make every item available free, asking people to consider making a one time or monthly donation to the ministry. For those who cant afford more, it will be a delight to send them the resources and they will feel totally free in receiving them. We want to focus on changing lives not selling resources.

Please feel free to order what you need, our heart is to bless you and those you will be ministering to. Our highest priority is to provide resources that will transform people’s lives, marriages, families and nations. Please send us testimonies, pictures and any suggestions of how we can serve you and your community.
Blessings,